There's More to the Story

Fitting out the Antelope in 1819

These Documents can be viewed in order on the page above.

1814 Passport for John Smith.  Smith was a prisoner of the British during the War of 1812, and had escaped to France.

1818 Smith Commands the Athenian.  In 1818, John Smith commanded the Brig Athenian as [art of a successful privateering expedition to the West Indies.

John Smith 1820 Piracy Indictment.  This is one of three indictments for piracy under the Law of Nations against John Smith.

1811 "Protection" for John Smith, showing he was an American citizen from New York.  The "Protection" was intended to protect American sailor from impressment by British warships.

John Smith was an experienced ship's officer and privateersman who spent most of his adult life at sea.  In 1819, Smith signed aboard the Venezuelan Privateer Columbia in Baltimore as Chief Mate.  The Columbia's name was changed to the Arraganta in mid-voyage, and she sailed from that point under a commission from Jose Artigas, a revolutionary leader in present day Uruguay.  When the Arraganta captured the Antelope off the coast at Cabinda, John Smith was put aboard as prize master.  He was later captured by the United States Revenue Marine Cutter Dallas off the coast of Amelia Island Florida and eventually he, his crew, the captives, and the ship were brought into the port of Savannah.  There, probably to his surprise, Smith was charged with piracy and put on trial for his life.

Below are illustrative documents for the story of the Antelope.  This collection will grow over time.  All posted documents are found in the public domain.  Imagery of the documents by Jonathan M. Bryant, all rights reserved. 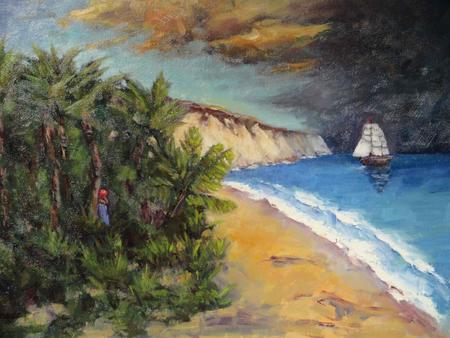