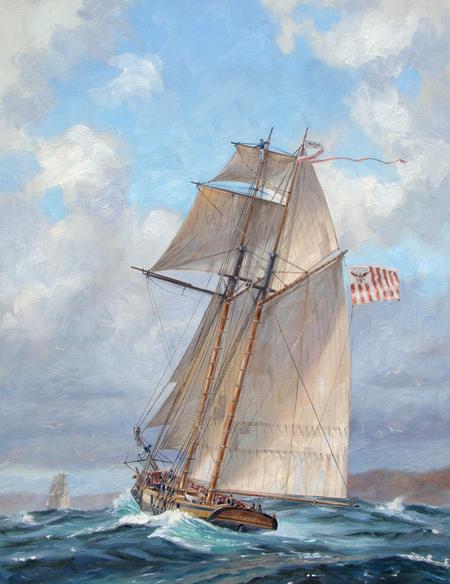 On June 29, 1820, the Revenue Cutter Dallas spotted a brig in the distance off of Amelia Island, Florida.  After a five hour chase, the Dallas finally closed to within "pistol shot" of the strange brig. Crews on both ships crouched down behind their cannon, ready for battle, when the brig suddenly surrendered. She was the Antelope, loaded with 281 captives who were starving and dying of thirst. Two dead captives were laid out on the deck. Captain Jackson and the Dallas escorted the Antelope into St. Marys, Georgia, where they crossed the bar on June 30.  Light winds prevented the ship from approaching the town, and another captive died that day of thirst. Finally, on the morning of July 1, 1820, the Antelope anchored off the town of St. Marys and was supplied with water.
The image shows artist Patrick O'Brian's depiction of the Revenue Cutter Eagle, similar in design to the Dallas though lacking the central gun on a pivot.  Notice the interesting Revenue Marine ensign, or flag.

Image by permission of the owner.