The Antelope captives were imprisoned at the horse racing track, but apparently the stables there did not provide sufficient space for all the captives.  Here, on July 25, 1820,  Marshal Morel purchased lumber, presumably to use in building sheds and other structures for the captives.  The Marshal would also arrange for guards, cooks, doctors, and others to work at the race track.  At this point he probably anticipated that the captives would after a few weeks be taken from Savannah for a return to Africa under the 1819 Slave Trade Law discussed in Dark Places of the Earth.  NARA-Atlanta, RG 21, D.C.G., Box 28. 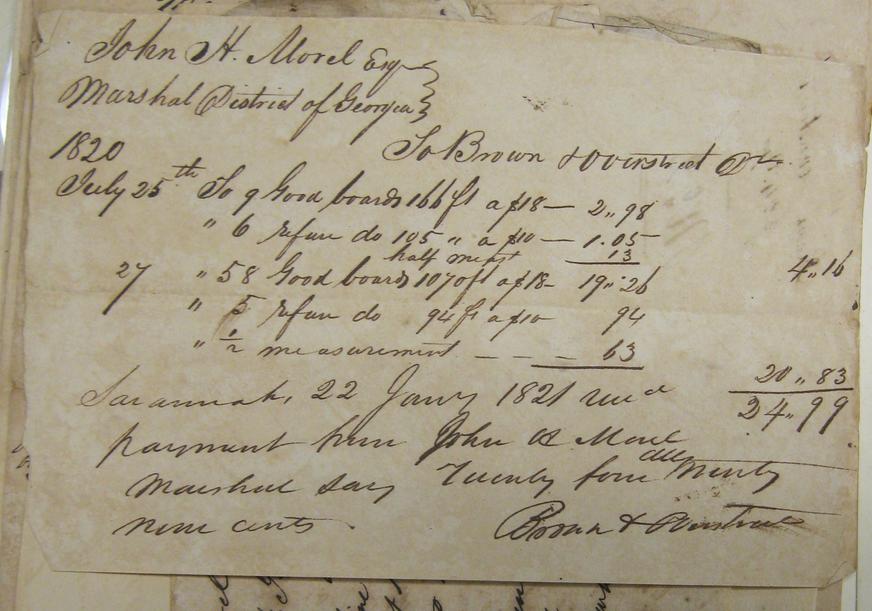 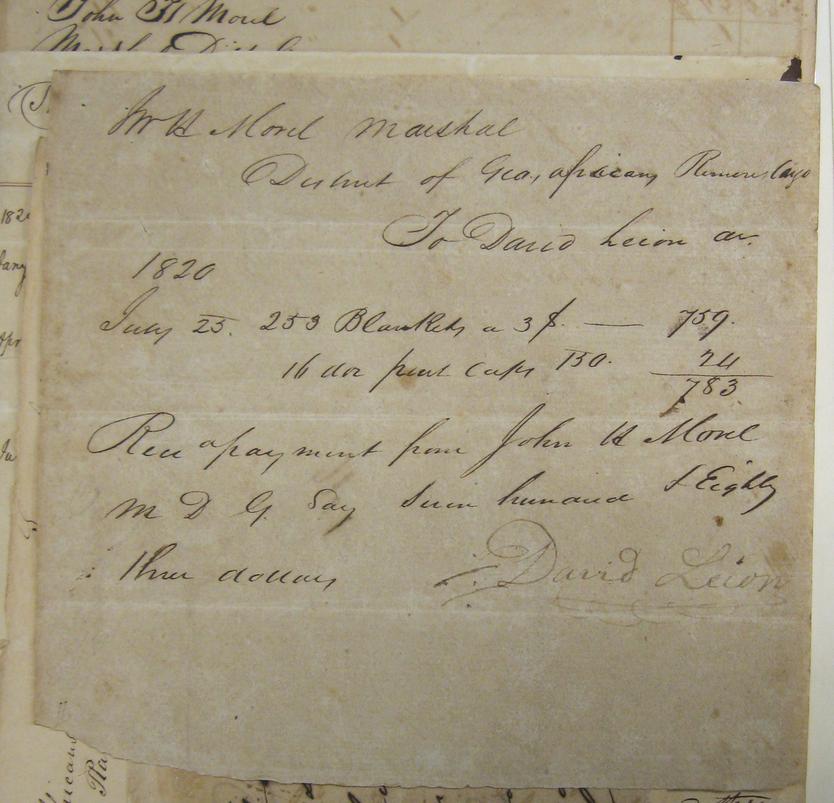 On July 24, 1820, the Antelope captives arrived in Savannah and were handed over to United States Marshal John H. Morel.  Morel and many others were shocked by the condition and age of the captives.  The avergae age of the surviving 258 captives was about 14, and more than 40% were between the ages of 5 and 10 years old.  Three doctors were called to attend to the captives.  As Dr. Moses Sheftall attests here he was called to attend the captives and found almost one half of the captives sick, and many very ill.  Dehydration, starvation, and disease afflicted all the captives, and as he noted they were also completely without clothes or even blankets.  In other words, the captives were naked.  This is an image of Dr. Sheftall's report written on July 24, 1820 at the scene.  NARA-Atlanta, RG 21,  D.C.G., Box 28. 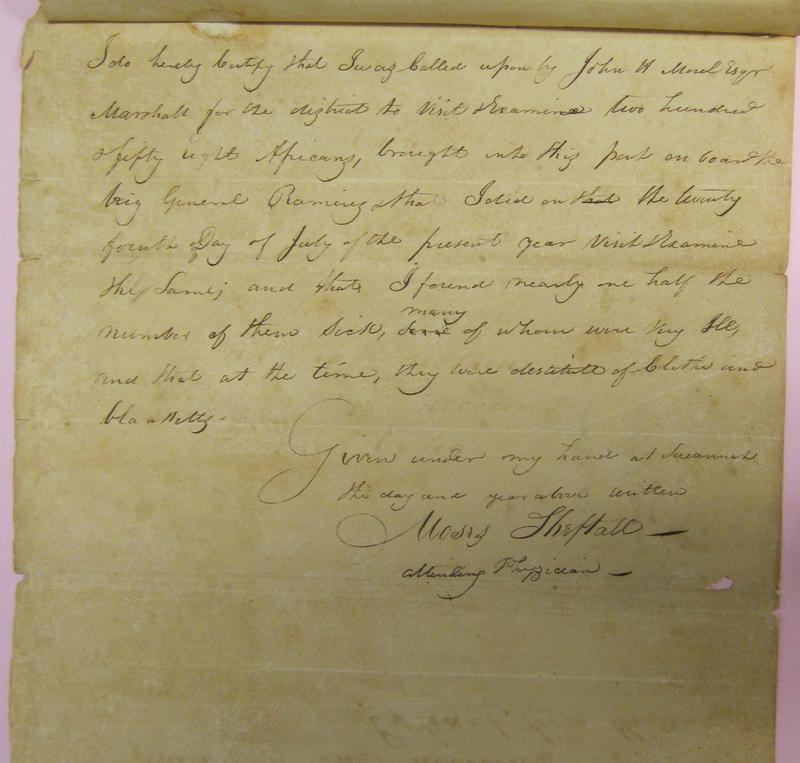 Federal District Court of Georgia distribution of the Antelope Captives.  This was done in the Long Room of the Old Savannah Exchange which stood where Savannah City Hall stands today.   Of 212 living captives, 142 were given to the Portuguese even though no actual Portuguese claimant had entered the case.  This caused US Attorney Richard Wylly Habersham to appeal the case to the Circuit Court, and later to the Supreme Court of the United States.  Chief Justice John Marshall later wrote that he suspected the "Portuguese" were a group of Americans illegally attempting to claim a substantial number of captives as slaves. 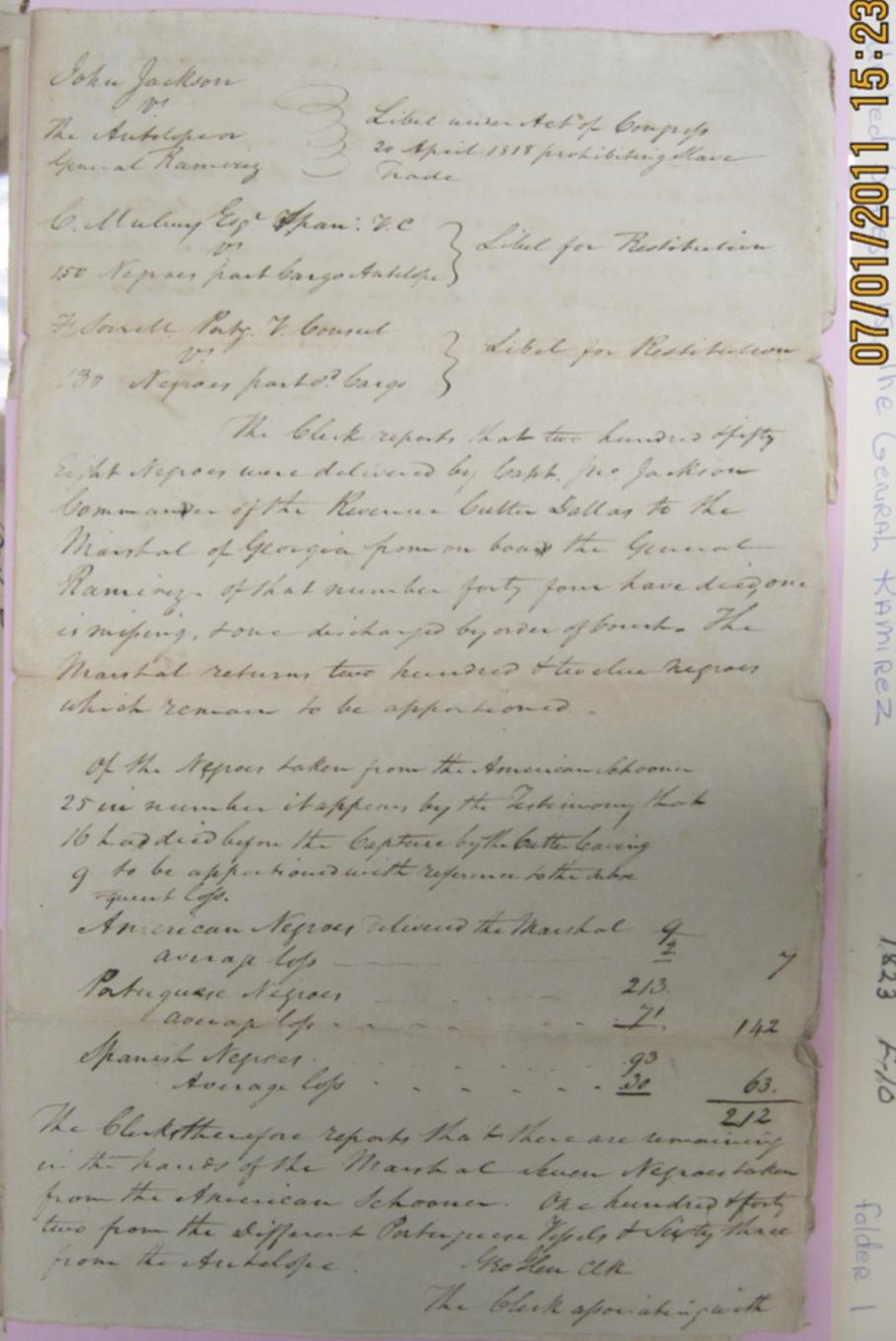 Note the interesting preservation of the similar sounds from this girl's African name Mekia in the slave-name Maria.  Mekia probably suffered from anascara as a result of chronic malaria.  Of course, a girl who can not speak English and who is suffereing from heart-crushing edema in the chest would probably be both indolent and slothful.  Mekia was later found to have gone to William Richardson's house in Spring Hill, where she died.  Savannah Republican, Dec.  30, 1820. 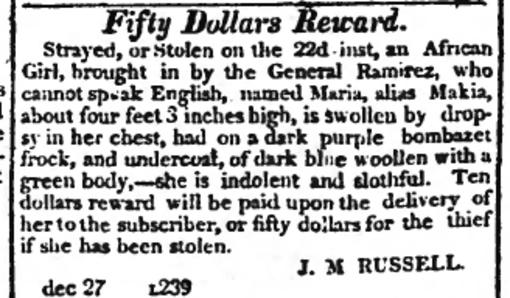 Images of Documents related to the Antelope Captives